Connect with Our Community

Check out our Great Photo Boards!

SOLD OUT - We'd be happy to add you to the waitlist

Stranded in Guatemala, Reflections on our Adventure in the Time of Covid-19

Imagine an enchanted azure lake surrounded by three towering volcanoes and many traditional Mayan villages; the soundtrack of scarlet-colored macaws as one wandered lush gardens filled with orchids, bougainvillea and other aromatic exotic flora.  That's the spectacular and serene beauty of Lake Atitlan in Guatemala. An adventure in Paradise, right?  Until it wasn't...

Ecuador: Unwind and Weave in the Andes

An Incan Tapestry of Fiber Arts and Relaxation

©Thanks to DeGrey Phillips for many of these photos

Postponed Until 2019 due to Scheduling Conflicts

Discover a feast for the senses

From majestic volcanoes, indigenous dress, traditional markets to a rich textile history, Ecuador is pure magic. We will visit the famous Otavalo and Saquisili Markets, wander the streets of historic Colonial Cuenca, explore the surroundings of Cotopaxi National Park, and enjoy hands-on weaving and natural dyeing workshops with local masters.  Our accommodations will be in Ecuador's haciendas, historicial estates that date back to the 16th century.  These are vestiges of the Spanish colonial period.

Click below for a downloadable detailed itinerary in two formats from our 2017 trip.  Stay tuned for the new 2019 trip details. 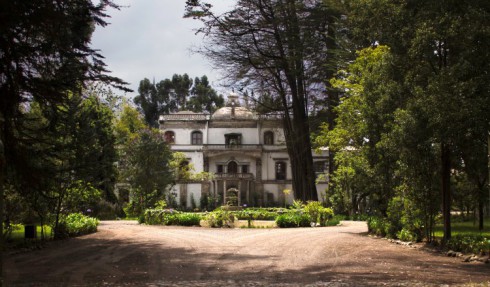 Many people are familiar with the Paradors of Spain and the Estancias of Argentina.  Ecuador has their own Haciendas. Our magical journey into Ecuador has us staying at several of these historic haciendas.  Dating back to the 16th century, these country estates are vestiges of the Spanish colonial era.  Spanish settlers were given large tracts of land to raise livestock and farm.  While each property is unique, staying in these unique accommodations give us a glimpse of Ecuador’s rich past and glory. Each hacienda is steeped in old world charm and ambiance with unrivaled hospitality and tucked into a spectacular landscape of volcano-fringed valleys.  Many serve farm-to-table meals creating a fine dining experience in lovely gracious dining rooms.

Weaving a History in the Land of the Inca 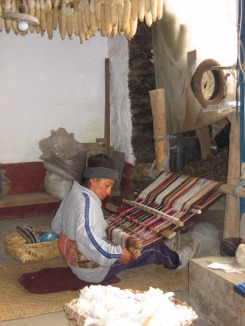 “To weave is an essential element in the Otavalan culture.

It has been greatly valued by its people and practiced

Backstrap weaving is an art that has existed for thousands of years. In Ecuador, the Cayambe and Caranqui people were weaving on these types of looms when they were conquered by the Inca around 1495.  Then the Spanish came to Ecuador and conquered the country in 1534 which changed everything for the indigenous weavers.  They were forced to work in Spanish textile factories using a new kind of loom, the treadle loom, which allowed for much faster production than the backstrap loom.  Thus, textiles became the main export of Ecuador for many years with the weavers working in servitude.  The local textiles were exported to Peru, Columbia and Bolivia. These weavers worked for the haciendas which often included working the lands of these colonial estates.  Sometime after 1964 and the passing of the Law of Agarian Reform and Colonization, many indigenous local tribes of Ecuador were granted titles to their land and encouraged to weave for their own profit.

Today in Ecuador, many highly skilled indigenous people are still weaving using their ancestors’ ancient techniques.  The result are hand-woven textiles renowned all over the world.   Weaving has allowed the Quichuas to improve the quality of their lives.  Otavalo is considered the center of the country’s textile production along with many other crafts including leatherworks and embroidery.